My running mileage had to drop back a gear the last 2 weeks as I was so busy with doing the C2C, and of course still having to work full-time as well, so I was quite suprised to tally up to find that I still managed to get in 34 & 37 miles respectively each week of running, along with the 137 miles from Whitehaven to Tynemouth on the bike.
I have done the C2C once before (3 years ago on the same bank holiday weekend) but that was in terrible conditions and with a hybrid bike. What a difference a weekend of beautiful weather and a great Specialised Secteur bike make! What a team as well, cycling with hubby and friends Harry & David, with Rebecca being our driver for car support, which thankfully we didn’t need, but nice to have someone take the bags from one B&B to another and of course cheer us on along the way. Only one accident (me whilst stationary of course resulting in a grazed knee) and only one puncture, so a fantastic effort. It is a great weekend, we did it over 3 days which is just nice, you could do it over 2 but that would be tough. It is not a challenge to be taken lightly, some of those hills are absolute beasts, and with bad weather could be absolutely horrible (as I know all too well) but definitely should be on the bucket list for many of us!

Legs were feeling a bit tired all week recovering from that, however I attempted a 20 mile run on Wednesday morning, failing to reach the target and only making 17 miles. I could have finished if I’d had to, but I also had to work a late shift at work, so thought better of it! Was still great though to be out along the river in the sunshine, but you sometimes have runs that just don’t go as planned, but in the scheme of things that’s all alright!
Finished off the week with a highlight of my running calender, the annual Wincle Trout Run, which is a great 9km fell run through Danebridge trout farm in Wincle, near Macclesfield. It is a short run by my standards, but what a toughie! Lung busting fell climbs, muddy patches, creeks and half a dozen stiles to climb over make for a very tough run indeed. The reward – a fresh trout! No t-shirt or medal here. There is also a great little fete in the village, with hundreds turning up to partake in cake eating, Pimms drinking, burger eating along with dancing, dog show, plate smashing and many more family fun activities. I took the Mother in Law along who is over from Australia, and she described it as something she has only ever seen in the movies! She didn’t think these sorts of things actually existed, but they do! I also had a new friend join me for the run, and for her first ever fell run, boy did Niamh do well. 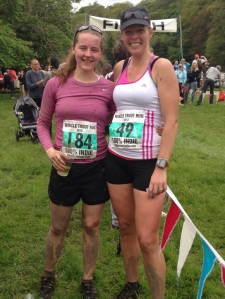 So the training is fairly well on track, hoping to get a couple of big runs in this coming week, but with Hubby suffering from the flu, not sure if this will proceed as planned but we shall see!