I had never considered I was a ‘runner’ until I had a few marathons under my belt and came to the realisation that I was slightly hooked on the sport.  Gone were the days of entering a race just to ‘complete’, I now wanted to ‘compete’.  Being an Australian I have always had an element of competitive spirit but after placing 2nd lady at Kalahari Augrabies Extreme marathon last year, I have uncovered a much deeper and stronger competitive spirit.

When I registered for the Marathon Des Sables (MdS) last year, it was before the Kalahari, and only just after completing my first ever ultra of 33 miles, so my initial registration was planned to ‘complete’ the event, but now I want to ‘compete’, and compete as well as I am able.  I have set myself 2 goals, the first is to get into the top 100; which would be a massive achievement worthy of popping a bottle of bubbly or two; and second would be to finish in the top 25 females; still a very ambitious target.  To be ready for this has meant preparing has taken over my life, or rather, our lives!  For those of you that have ever run MdS, or trained for other massive events can appreciate, it takes over not only your life, but those of others close to you; in particular partners, family & friends.  I’m lucky that my husband, Dion, is also competing, and aiming for a top 50/100 finish, so needless to say, it is all pretty competitive on our training runs! 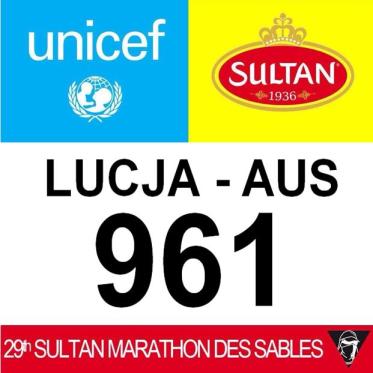 My Race number – watch out for me!

For the last 4 months our lives have been consumed by all that is MdS.  What do I mean by consumed?
1.  Training – obviously there is a lot of training to be done.  Most weeks we are clocking up a minimum of 70 miles through running alone, then there’s stretching (yeah right!) turbo cycling, yoga….. It all takes very valuable time.  We did do a lot of our training together which was mostly enjoyable; whether it be running together, me following Dion, or Dion chasing me down after giving me a head start to work on speed work.  It hasn’t all been fun & games though, there have been some very tough runs that I wouldn’t class in the ‘fun’ bracket.
2.  Every waking minute we are both thinking about MdS, at least every hour it gets spoken out loud and then there’s dream time too.  I have often heard Dion talking in his sleep about his run!
3.  Alcohol, or rather lack thereof!  Since January 3rd we haven’t touched a drop.  To be perfectly honest it hasn’t been that hard within me to give it up, it becomes more of an issue with friends & colleagues as let’s face it, you become a bit of a party pooper! Not only are you not drinking, but being out later than 9pm is seriously eating into my valuable sleep time, and we are regularly in bed by 8:30pm these days.  Rock n Roll!  I’ve had to go to the point of diarising in some drinking sessions with friends when we are finished and back in the UK in the last 2 weeks of April before we get off the booze again for our next challenge; our first non-stop 100 mile race, the Mohican 100 in Ohio, US on 21/22 June, more on this later.
3.  Food, trying to eat enough for energy whilst trying to keep it clean & healthy.  This also limits the social aspects as you don’t want to go out and eat rubbish, so you tend to eat at home.  Though saying that when we have gone out, the bill is markedly reduced without alcohol!
4.  Money!  MdS is not cheap, especially for two of you, then there’s the kit, again times two!  I know we both earn money, but when you times everything by two it becomes rather scary!  The silver lining though is that you don’t need to explain to your other half as to why you can’t go out this week because you’ve just spent how much on entry fees, £80 on a pair of shorts, or £100 on shoes, or other ridiculous amounts for bags, sleeping bags, sleeping mats…..the list goes on!
5.  Conversation is all about running, MdS, packing, MdS, races, MdS, blogs about MdS, shoes, MdS, feet, did I mention MdS yet?  And muscles, tiredness, aches, pains, food, nutrition and it goes on.  I am so sorry my dear family, friends, colleagues, twitter pals, clients, taxi drivers and basically anyone that will listen to me that you have heard about nothing else, I really just can’t help it, it is all that is running through my head, no pun intended!
6.  Work, now this really does get in the way!  Imagine if I could just focus on MdS full time? Oh wait, I think I do, and then work on the side!  No, that’s not true, we both work in high level senior management roles which do take up a lot of our time & concentration, so it is not unusual for me to be up at 5am knocking out the miles or out late at night to get them in as well.
7.  Social life that doesn’t exist.  It can’t, it has no place in our schedule.  It probably feels like we have dropped off the face of the Earth to our friends & family, except for the ever frequent twitter and Facebook status update in a running related post.  Again, I’m sorry, we haven’t disappeared, we still love you, it’s just unless you’re doing this too, we currently don’t really have anything in common and do you really want to hear about it all, again!?  We still do have things in common, but we are just so tunnel visioned we can’t see for trying.
We have tried to keep other interests and even between ourselves promise we won’t talk about it for the day, and have a ‘day off’, but it doesn’t work.  It must be so frustrating for other non-running halves to put up with this.  I don’t know what we are going to talk about when this is over, our next race perhaps….?  We can be midway through a conversation about anything else, or watching a movie; and suddenly you just have a running related comment that comes out, and it’s fine with the other, you don’t mind your conversation being hijacked for this reason, nor mind hijacking the others conversation because it’s about MdS, everything else pales in comparison.
8.  The washing never stops!  Whether it’s a shower after a training session, or after another night of the sheet drenching sweats in bed (apparently this is the body adapting); and then it’s training kit & those sweat drenched sheets in the washing machine!  It sure is a glamorous life.

9.  And don’t get any ideas about sweaty nights in bed for ANY other reason, I’m way too tired for that

.
10.  Spreadsheets & calculations – we’ve spent hours working out our total kit weight stripping it back to the absolute minimum, and weighing food out meticulously, researching the highest calorie content and bang for your buck in terms of protein & carb content.  It’s done now and I am going to be avoiding any conversations during the pre-race days in Morocco with other competitors as this is one area that everyone has an opinion!  You hear of so many competitors packing and repacking kit & food the night before race day because they suddenly hear what other people are doing, taking & eating.  We’ve done our research, it’s been done to death at our house, we’ve tried it, we’ve tested it and it works…..for us.  Everyone is different and that’s the point, stick to what you know and have learnt and trust yourself.

Who else has experienced this feeling of complete and utter obsession?  Have you alienated people through this or have they just realised to leave you to it and you’ll be back to ‘normal’ at some point?  Or have you found that the majority are actually genuinely interested, stunned, in awe (insert as applicable) about what you are about to undertake?  Be it MdS, or another equally impressive challenge.  I have to admit that I am surprised at some peoples genuine interest, some friends and some complete strangers hearing about it for the first time; and also surprised, and admittedly somewhat disappointed, by the lack of interest of some other friends.  But maybe it’s just not their bag at all.

It’s now 2 weeks & 2 days until the 29th Marathon Des Sables, and I have a feeling it could be the longest 2 weeks & 2 days of my life!  I’m ready, along with around 1200 other eager competitors from all around the globe that will all be descending on the Sahara desert soon, to run my heart out through 160 miles of high temperatures and tough terrain.  Until then you’ll find me in either the steam room or at a Bikram yoga session trying to sweat out my frustrations, oh and acclimatise of course.  Wish us luck!

One thought on “When a healthy habit turns into a full blown obsession!”