After a so-so Scottish summer the invitation to attend the blue water of the Canary Islands, sparkling in the hot sun alongside the white stony seaside cliffs for the inaugural Half Marathon Des Sables in Fuerteventura sounded like too good an opportunity to pass up. 4 days later, 270 runners that took part could all vouch it was as far from a half race and holiday as you can get.

MdS Fuerteventura is a four day, 3 stage, 125km self sufficiency footrace through the rugged and arid terrain put on by the mastermind behind the ‘Toughest Footrace on Earth’ the Marathon Des Sables in Morocco, Patrick Bauer.  Patrick’s reputation for putting on a tough race did not go untarnished with runners battling against the extreme heat which reached an el-scorchio temperature of 42 degrees Celsius alongside climbing peaks with a dizzying total ascent of 2,000m. A key difference from the MdS Morocco was at the completion of each stage you would also have your own individual tents that remained at the bivouac as we were transported to the different race starts by coach each day.  As per MdS Morocco you must carry all of your kit and food with a minimum of 2,000 calories required per day. Of course there are no showers during the race, all the while the ocean teased us constantly with the promise of cool, refreshing relief, but it was off limits to competitors. As one of the volunteers said ‘The pool is closed!’.  The promise of a dip in the water would continue to lure me to the finish.

Bivouac – home for the week

As part of the WAA Team, I’d been invited to take part with Anna-Marie Watson, coming along after her recent 7th placing at UTMB only 3 weeks prior and fellow international WAA team members JiongHow, Megan and Loic. It was a once in a lifetime opportunity to be part of the first event and history in the making.

Arriving a couple of days before race day and enjoying the amazing sporting and relaxing facilities of Playitas Resort, one of the sponsors of the race, it was easy to get lulled into a false sense of holiday relaxation mode. Anna-Marie & I enjoyed lounging by the infinity pool in between yoga classes, massage and laps in the 50m pool & indulged in the freshest grilled fish & local Canarian potatoes and salads, tempting each other with stories of races we’d done with both our bucket lists becoming increasingly longer.

Reality soon hit after the mandatory kit & medical checks took place and we were sent on our way with a 7km ‘acclimatisation’ walk to the first bivouac where we would also receive our ‘one man’ tents which would be our shelter for the next 4 nights. In true MdS fashion the first night involved the official race briefing following by a delicious buffet, our last fresh meal as self sufficiency starts from breakfast of day 1.  The tents were in circles of 6 and my camp consisted of Anna-Marie, Hamish, Tarn & Nats from the UK and Jordi from Spain.  Although the camp wasn’t split into nationalities as it is at MdS Morocco, everyone still automatically seemed to separate into nationalities unintentionally.  It was a good mix with 3 of us MdS Morocco veterans, a nurse & a podiatrist (never a bad inclusion on a multi day event). 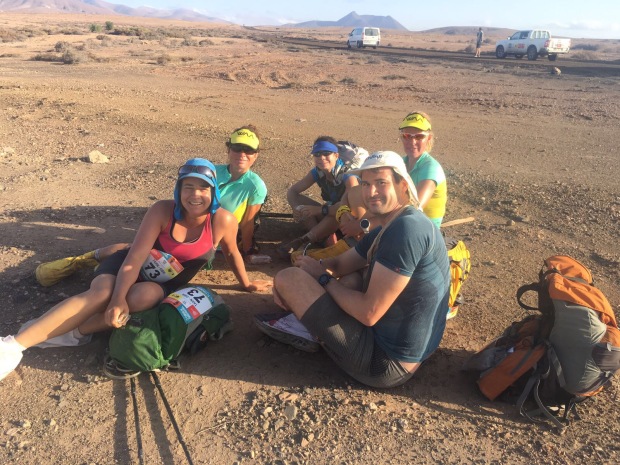 The route for each day was revealed after a 2.5km walk to the road where buses would then take us to our start location for the day, with day 1 & 2 finishing back at the bivouac.  Our initial thoughts of a relatively easy 25km to kick start the week were quickly shattered when seeing the route elevation for the day involved a 500m ascent at the start, there was 800m for the day.  It was a spectacular start line set under the cliffs along the beach with the waves lapping at our feet, to the beats of ‘Right Here, Right Now-Fatboy Slim’ the 10am start was quick as we scooted along the beachfront before beginning the climb.  It was already heating up and the lack of wind up the climb was energy sapping, the views from the top were energising as was the fun descent down to Check Point (CP) 1. A long endless stretch of beach followed where we ran alongside bathers and sun worshippers, some of them nude much to my amusement, before we climbed up again, this time being greeted by a 100m near vertical sand dune which had people on the hands and knees to get to the top!  After a gruelling stretch of sandy climbing I reach the finish, shattered, in 3.5hrs.

After a restless night in my small tent the long day was upon us, 65km with 2,154m ascent and a cut off of 25hrs to complete the stage, starting at midday we would be going straight into the heat of the day which really floored me after a Scottish summer of temperatures struggling to reach 20 degrees. As we started on the beach clambering over stony paths and an ascent that would take us over some fabulous peaks with magnificent views I knew quickly that I would need dig deeper than I’d thought I’d need to during this race. 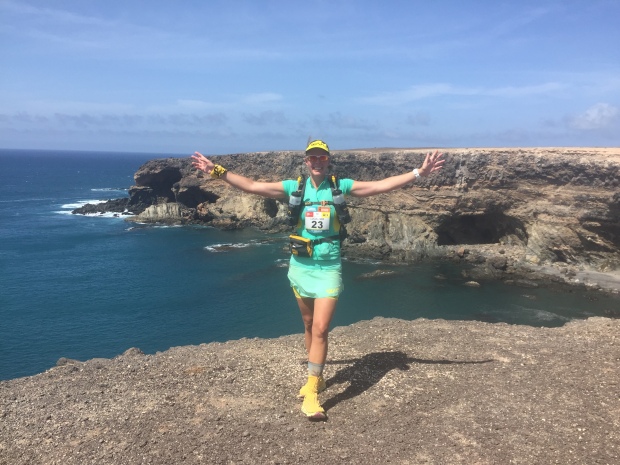 All smiles before CP2 on the long stage

I was happy to have gotten over the highest peaks and through to CP 4 before it was dark, as the sun set the air gratefully became cooler & I could finally take on more food and found a sudden burst of energy & joining forces with French runner, Christophe, we charged through to the final CP managing to overtake quite a few runners on this stretch.  Although the sun was down my body was sweating profusely and I was saturated in sweat.  As is Patrick’s specialty the long stage final stretch seems to be never ending with relentless sand and diversions down to the beach before having to climb back up and while seeing the finish line complete a massive loop around before finally reaching it to test your mental strength.  I got in just under 11hrs for the day which was exactly as I’d predicted based on day 1 time, spot on! 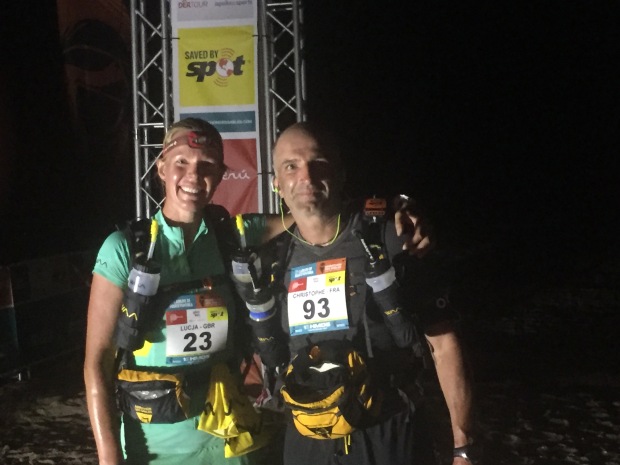 Finish of the long stage at 11pm with French runner, Christophe

We were all grateful for the rest day that preceded the long day and this was spent mostly horizontal, chatting to fellow competitors in between naps and snacking.  Although the tents were individual and far too hot to sit in during the day, we were all able to congregate under a large gazebo which offered the only shade as far as the eye could see.  The organisation didn’t let us down with the traditional ‘surprise’ bottle of ice cold Coca Cola later in the day which was a welcome distraction.

The wind picked up in the bivouac and after a night of flapping, flailing and collapsing tents the worlds grumpiest runners awoke to take in the last stage.  The promise of a cool swim, shower, cold beer and a fresh bed drove all of us to a fast paced last day of 21km.  We powered through lava fields with sharp jagged rocks and a long stretch through a sandy river bed before a final climb up to a peak above the oasis of Playitas Resort and the end was in touching distance.  It was done!  I’d promised myself all week that I was going straight into the ocean at the finish in full kit, so I did just that and it felt amazing!

Competitors were invited to camp out for the final night, but Anna-Marie & I were smug that we’d arranged to book an apartment, no more sandy, windy tents for us.  Suitably showered and extremely hungry we again indulged in the amazing food on offer along with some chilled Cava to celebrate our joint accomplishments and her sensational win before attending the awards ceremony and gala dinner with everyone.  During the final moments of the evening we watched a 5 minute film of the race which captures all the  magic of the week, so much so we found ourselves saying ‘Wow that looks amazing, shall we do it again?’  Watch it yourself below and let me know your thoughts, 2018 anyone?

There was an error retrieving images from Instagram. An attempt will be remade in a few minutes.