As I reached the final peak of ‘Eight Immortals’ of the Wilson trail high in the mountains of Hong Kong my head torch made out the silhouette of a man perched on the summit. That man was my ever patient and supportive husband Dion who had been waiting patiently for me in the dark as I painfully ascended the last climb of The North Face Hong Kong 100. ‘What took you so long?’ He laughed as he asked me before we shared a few sugary treats for a last surge of energy for the final descent back into Tai Po Market to the finish line. 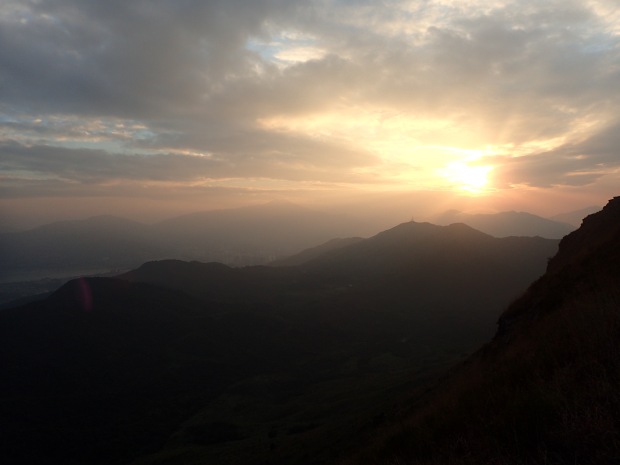 Sunsetting over the Eight Immortals

Dion and I had been living apart for just over 4 months at the time with him based in Beijing, China to ‘Bring Gobi Home’ (see FindingGobi.com for more details on this life changing adventure) whilst I remained in Edinburgh with a couple of visits in between, so we had decided that as this was our couple time that we would run this race together. Having never been to Hong Kong before we were both keen to have fun, get the distance done for some intensive training, take lots of photos and soak up the atmosphere. In other words we weren’t ‘racing’. 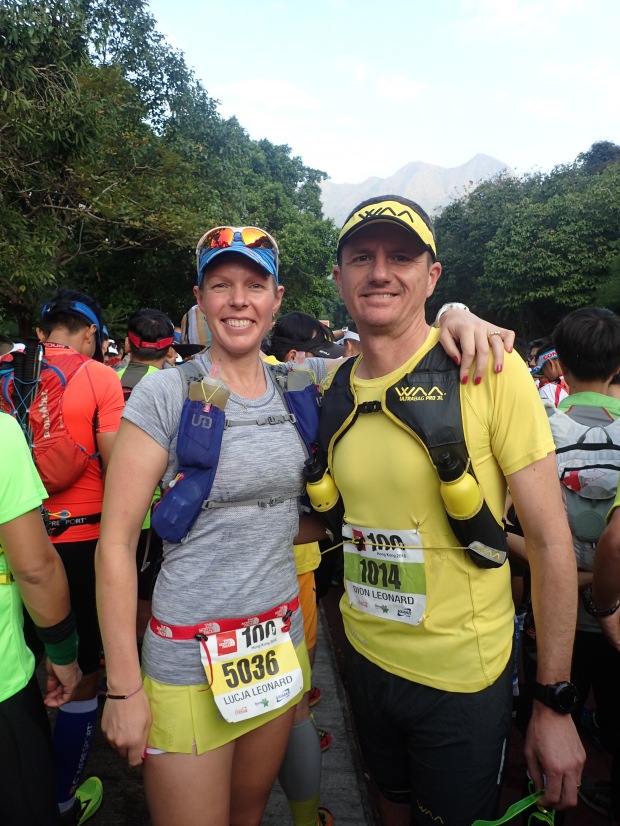 Ready together at the start line with the mountains behind us

“It must be great to be have a partner that runs too, so you get to run together.” I hear this a lot from other runners that may or may not have partners that run with them, but running ‘together’ is not always how it goes. We have finely tuned how we run ‘together’ over the years after many frustrations early on where I can’t keep up with Dion and it hurts him to run slower at my pace. So now we might head out for a run and he gives me a half hour to an hour head start (depending on the distance) and then chases me down; this works quite well as I run quicker to try and stop him catching me and he also runs quicker as he most certainly wants to catch me. Another option is for one of us to drive to point B, park the car and run back to point A and the other runs from A to B, passing each other halfway and then collects the car. Or I just make sure Dion is knackered from a big block of training and we do run together as then he’s slowed down enough to keep ‘up’ with me. 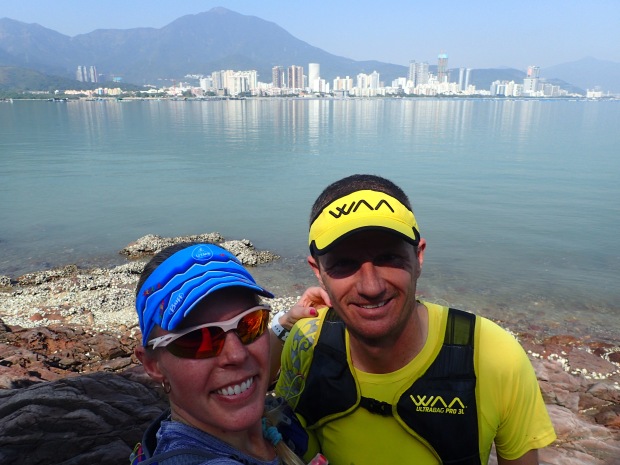 Taking time out for a selfie

We don’t tend to race together, although we might be at races together (KAEM 2013 & 2014), MdS 2014 and various local races, Dion is much quicker than me and on the edge of professional running where I am not quite reaching that level, yet. I hope that by running more together in both training and racing that I can learn from his experience, skill and mindset to develop myself into stepping more into the competitive world of running. I do enjoy the feeling of being on the podium and want to feel this more and more. 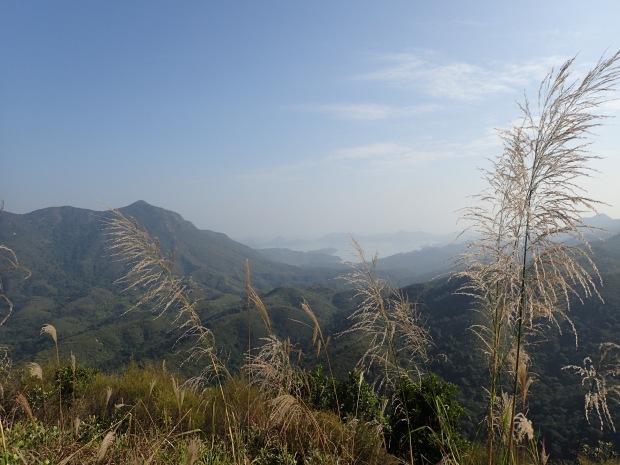 With the mountains looming ahead of the start line it wasn’t long before the path quickly turned both vertical and single track at the same time causing a massive queue of runners who were halted to walking. Not a bad strategy to conserve energy but it was much too slow so a tip if you do this race, get yourself a bit further up the starting pack if you want to get a move on. 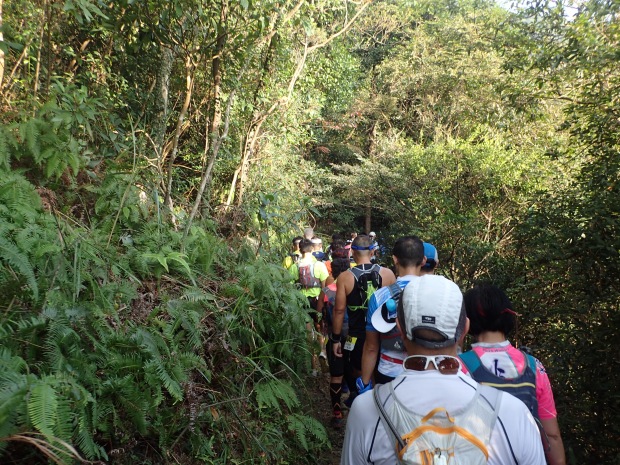 I’d heard a lot about the trails of Hong Kong but was still surprised by the sheer size of the mountains, I wouldn’t have believed it without seeing it for myself. It was every bit as beautiful as a mountain fairytale with steep, rocky trail stairs leading you high into the clouds even more brutal than I could have hoped for. The trails lead you vertical to take in some exceptional views of the iconic Hong Kong skyline which we had the pleasure of enjoying in brilliant sunlight, at sunset and into the darkness. 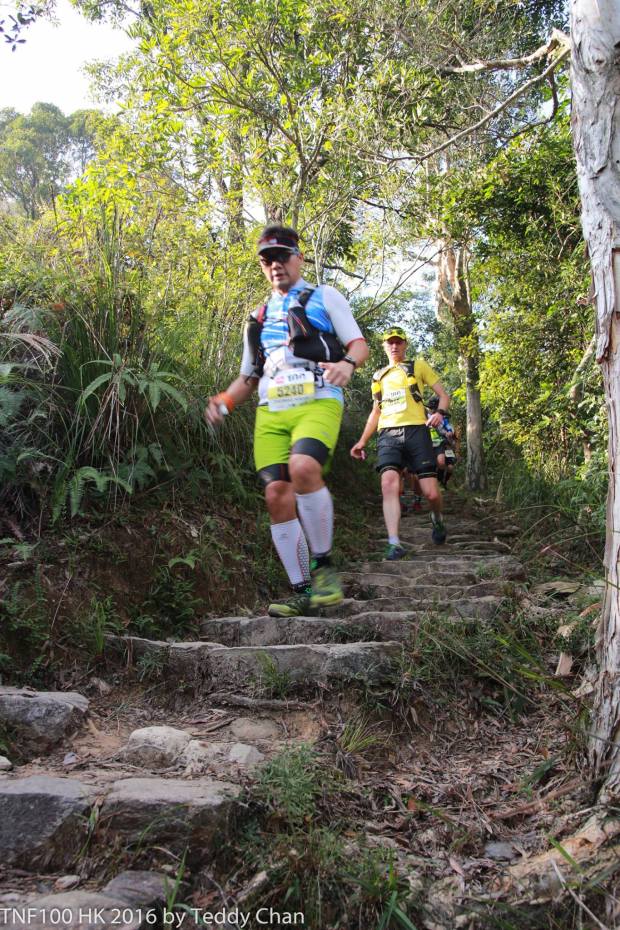 Dion descending one of the many downhill stairs

It wasn’t all trails though. After each descent we entered a local village all bustling with activity of daily life and offering the opportunity to purchase some cold Coke or tasty local food of which many of the runners were taking full advantage of, ourselves included. A great benefit of Dion running with me was that he would run ahead and surprise me with his purchases which kept him busy shopping with the locals for our treats along the way. The taste of an ice cold Coke mid way on a hot, humid race is second to none. And it was humid, some of the runners looked like they’d been for a swim instead of a run they were sweating so much. It certainly paid dividends to put skills learnt in the desert into practice with hydration and salt tablets to keep dehydration at bay. 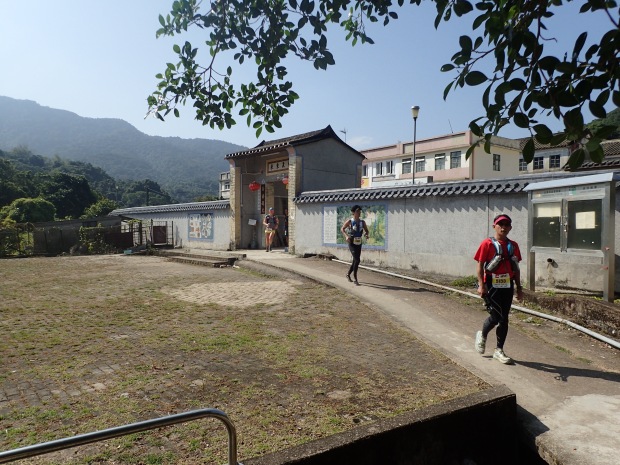 Running through one of the local villages

We resisted the temptation at lunch time as we passed a gorgeous waterside village abundantly laid out with tables full of locals feasting on an array of food that smelt absolutely divine, a decision I now half regret as we never did make it back to that same spot for lunch the following day. Dion made sure we didn’t do without though ensuring we had dim sum and noodles to eat at points along the way. 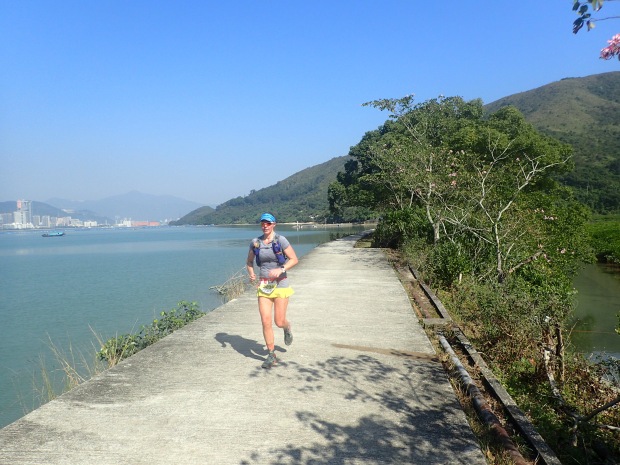 It was an enjoyable change to run together as a couple in a race environment and gave me the opportunity to push myself harder drawing on Dion’s resolve and experience. I have no doubt that he would be a great pacer for me in a future race and will push me on to faster times. It was also like having a personal photographer alongside me all day with Dion often racing ahead to capture the amazing footage you see here in our film of the race.

The North Face Hong Kong 100 delivered an exceptional experience of trail running whilst giving runners a taste of local culture and people. A tough challenging race not to be taken lightly with its unrelenting ups and downs in the humidity to add that extra test of endurance. This combined with a weekend of exploring the bustling city and eating the delicious food it makes for a great running adventure escape. After my first taste of Hong Kong I can definitely see a return for another race in the future, my imagination was captured as we passed Lantau Island on the way to the airport…Lantau 50k Dion? 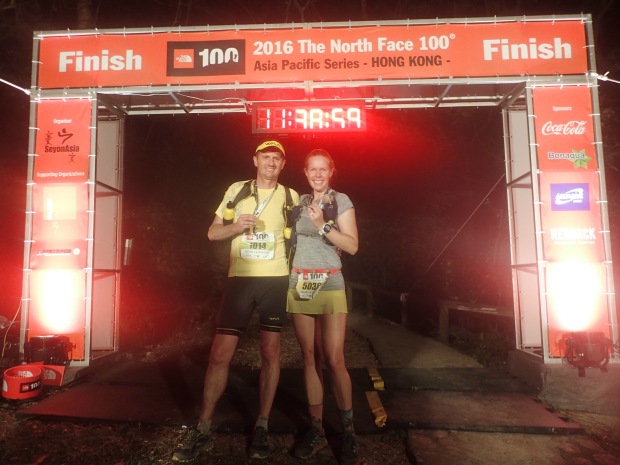 Smiling faces at the finish line